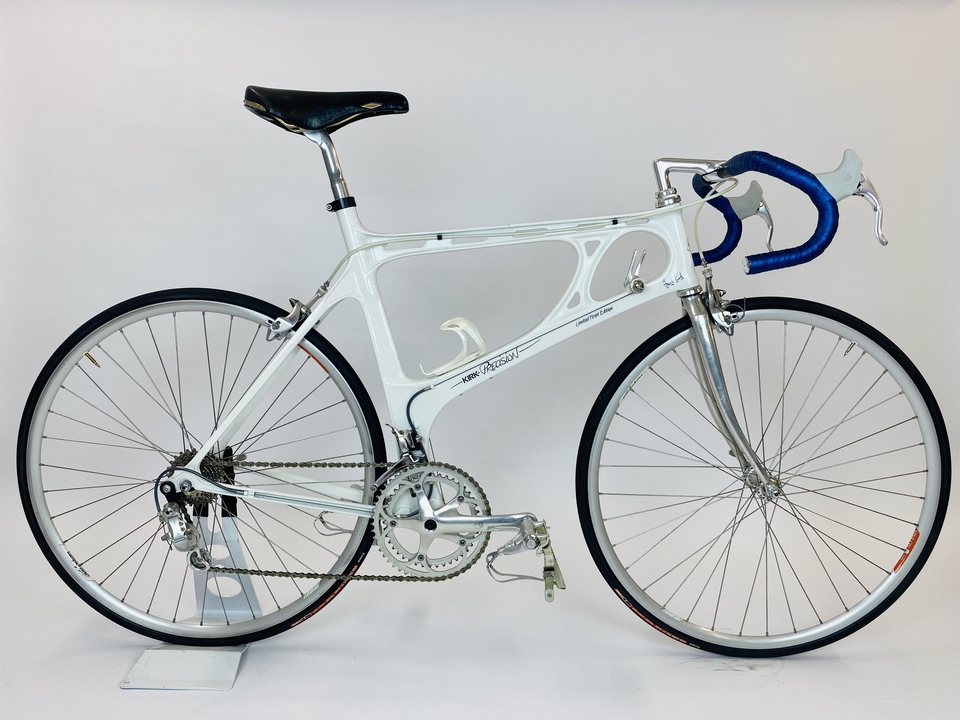 
This bike was purchased brand new in the Kirk Precision factory in Basildon, England in 1987, wheelEd out to the car, ridden 3km around the block, then hung on the wall. It is as close as you can get to NOS (new old stock) without it being unused.
In the 1980s, Frank Kirk, an Engineer who worked in the aeronautic industry as well as the automotive industry, had a great idea.
To design and build a bicycle frame from cast magnesium.
Magnesium is a light structural metal, which can be found pretty much everywhere in the earths crust and in water.
Kirk claimed that one and a half cubic meter of seawater contained enough magnesium to cast one bicycle frame.
His concept for the frame was calculated by computer programs, making it in fact one of the earliest CAD-bicycle designs.
The bikes however, never really took off, and even though a Dutch cycling team (TVM) used the bikes for a couple of years, the bikes never achieved a general acceptance by the public. In an almost cruel twist of fate , the Kirk Precision factory burnt down (magnesium burns very, very hot!!), this finishing off the brand. Of course, now that the Kirk Precision is no longer around, the bikes have become very collectable.
This bike is a 'limited first edition', and features Campagnolo Chorus components, and a Selle Italia Rolls saddle.